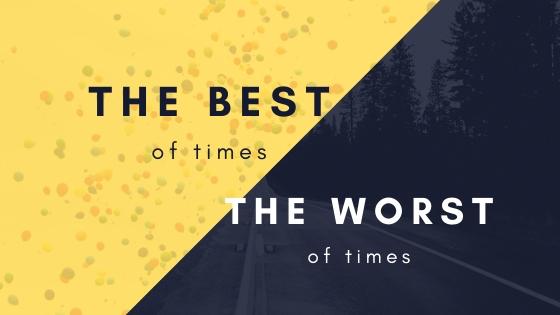 One of the best books I read in high school was a Tale of Two Cities by Charles Dickens. The story is set in the late 18th century (against the background of the French Revolution) and talks of human endurance, love, sacrifice, of madness, and much more. It’s a beautiful book which I recommend to all of you. The book begins with this quote “it was the best of times, it was the worst of times, it was the age of wisdom, it was the age of foolishness, it was the epoch of belief, it was the epoch of incredulity, it was the season of Light, it was the season of Darkness, it was the spring of hope, it was the winter of despair, we had everything before us, we had nothing before us, we were all going direct to Heaven, we were all going direct the other way. . .” This quote reminds me of the dichotomy that we often find in life: good vs. evil, life & death, success & failure, rich & poor, God & Satan, yin & yang, etc. It suggests that all these opposite forces (dualism) stand equally matched in their struggle and are complementary to each other. We can’t have the one without the other.

Every day when I turn on the news, read a newspaper or go on social media, I see the number of Coronavirus (COVID-19) infections across the world and the amount of death related to the disease. And at times, It can get petrifying. But I sincerely believe that if the news outlets and other media could report the number of people who are born every day the same way they do the number of people who die of COVID-19, people will have a different outlook about the current situation. Let’s do the number. The first human cases of COVID-19 was first reported in humans in Wuhan, China in December 2019. When I turned on the news this morning there were 3,267,867 cases around the world with 233,560 deaths according to CNN. The World Health Organisation (WHO) has slightly fewer numbers, with 3,145,407 cases and 221,823 deaths. According to the UN about 360,000 babies are born each day. The number of birth thus far in 2020 is 44,832,000; according to the World Counts, with 1,634,345 number of birth this week alone; this number is increasing every second. By the time some of you will be reading this, the numbers may be slightly higher. Why can’t the news media report the good news along with the bad? Why must the focus only be on the number of death and not on the number of birth? Why don’t we report the number of people who have recovered the same way we report the number of people who did not? Why must the focus be on installing fear in the lives of the people? My mother is among the 217,769 or 233,429 deaths (depending on which source you decide to go with – I’ll go with the WHO). Despite suffering a great loss like the other 217,768 other families who have been affected by this pandemic, I want to believe that the world is still getting better.

Tale of Two Cities ends with a few quotes, but the one I particularly like says, “I see that I hold a sanctuary in their hearts, and in the hearts of their descendants.” One source describes this visionary speech as a means to provide a sense of closure and optimism to an otherwise tragic ending. With what the world is facing, it seems as if the end of this year looks disastrous, but I have a great sense of optimism about the future. My favorite quote from Barack Obama is: Hope is not blind optimism. It’s not ignoring the enormity of the task ahead or the roadblocks that stand in our path. It’s not sitting on the sidelines or shirking from a fight. Hope is that thing inside us that insists, despite all evidence to the contrary, that something better awaits us if we have the courage to reach for it, and to work for it, and to fight for it.

So my message to you is, yes, we are faced with one of the worst tragedies in human history, but I trust the resilience and the ingenuity of the human spirit, and when all is said and done, this too shall pass. It may feel like it is the worst of times, but it is still the best time in history to be alive.